The fact is that the police don’t follow the rules when it comes to “protecting and serving” black folks.  We know it and they know it too.

We are consistently dismissed when we complain that racial profiling by the police is real and that young black men are TWENTY ONE TIMES more likely to be shot by the police than their white counterparts.

Not today.  Sam Dubose’s face was blown off last week by a University of Cincinnati police officer after a TRAFFIC STOP and the body cam footage is so bad, that officials won’t even release it. And the mayor and police chief are bracing for riots when it is released. 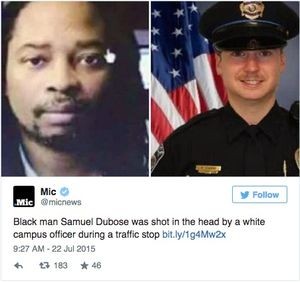 How does a routine traffic stop (for no front plate and suspended license) end up with this man’s face blown off?  By a campus cop who was not even on campus?  Those offenses only become capital offenses for black people.

“It’s time for an uprising: an act of resistance or rebellion; a revolt.

Every time we are killed by the police, our souls are traumatized.  Our mental state is thrown out of equilibrium.  Our blood pressure rises, our hearts race, our temples pulse.  That is extremely stressful and distressing and takes a toll on our psyche, not to mention the toll on our physical health.  It’s time to give it right back.  We have to return the same level of distress to the collective psyche of police departments and communities around this country.”

I wrote those words last year.  I meant it then, and I mean it ever more so now.  If Cincinnati needs to “riot”, then so be it.  As Dr. King said, “rioting is the voice of the unheard”.  Let the uprising begin.

Black folks cannot keep waiting for our humanity to be recognized.

If you aren’t in this battle with us…if you don’t agree that almost 300 years of chattel slavery, plus another 150 years of black codes, Jim Crow laws, and now Jim Crow Jr. systemic oppression is enough dismissal for any one group of people to take…

Photo Credit: Thanks to MicNews for the photo.